Literature / The Wooing of Étaín 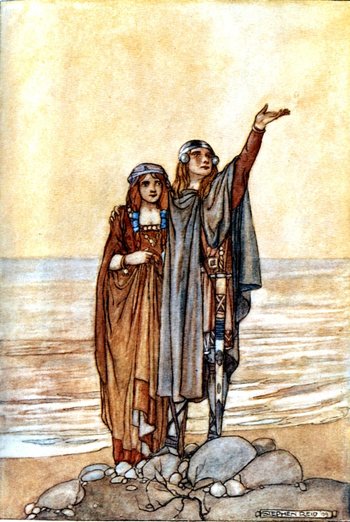 "Follow me now to the Hill of Allen" by Stephen Reid
Advertisement:

The Wooing of Étaín is a mythological romance of Irish Mythology, set after the time when the mortal Gaels conquered Ireland, and the immortal Tuatha Dé Danann retired into their subterranean palaces, becoming the Aes Sídhe, the people of the fairy mounds.

Midir of the Tuatha Dé Danann, Lord of Brí Léith, takes to wife Étaín, daughter of Ailill, regarded to be the most beautiful woman in Ireland. But his first wife Fuamnach does not approve of the marriage, and makes two attempts to separate them - first by turning Étaín into a fly, then by summoning a storm that blows her far away.

Many tribulations later, the fly ends its odyssey in the drinking cup of a Gaelic woman, wife to Etar, a Lord of Ulster, and is accidentally swallowed. The lady gets pregnant and gives birth to Étaín, the daughter of Etar (or so everybody thinks). As Étaín II grows up, word is she is the most beautiful woman in Ireland. And so it is no wonder the young High King of Ireland, Eochaid, sues for her hand, which she graciously grants.

But Midir has never stopped looking for Étaín, and eventually finds out what happened, recognizing his own wife in the queen of Ireland. But Étaín has forgotten her former life among the Aes Sídhe and is scrupulous to leave her new husband, forcing Midir to resort to cunning and magic to wrest her from Eochaid.