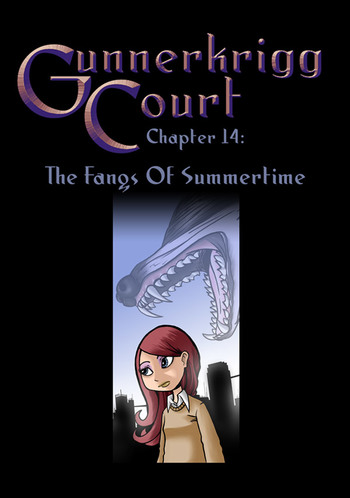 Look out for the wolf.

It is the last day of school before summer vacation. The Donlans have invited Annie to come with them for the summer, but she declines, because she believes her father will try to contact her over the summer. Anja notices something out the window, and Kat asks her what's up. Anja invites Annie and Kat onto the roof of the Donlans' house, where they see a large green glowing symbol over Gillitie Wood. Anja asks to borrow Annie's blinker stone, and uses it to send a reply: a glowing red symbol. Annie didn't know the stone could do that, and Anja promises to show her how to use it.

Mr. Eglamore arrives from across the rooftops, and Annie asks what's going on. The people of the forest are requesting a meeting, concerning Annie's trip across the bridge. Eglamore admits he was expecting this sooner, and prepares to go get the usual people, including "Parley and Smith". Annie is told she has to be there, but Kat isn't allowed. Annie is also told to bring Reynardine. Eglamore then leaps off, surprising Kat. Anja gives Annie back her blinker stone.

In the main hall of the Court, people are gathered: The Headmaster, sitting in a chair reminiscent of a throne. A blonde woman with light brown skin standing at his right, who's watching Annie. A lot of teachers. There are only two other students besides Annie: a tall brown-haired girl with a ponytail, and a shorter boy with very thick eyebrows. Parley, and Andrew Smith, respectively. Parley is irritated because she'd already packed her things and looks a mess. They introduce themselves to Annie, being in years 10 and 9 respectively. Parley blames the meeting on Annie, because she tried to cross the bridge and fell off. They've also heard of her mother, because she worked as the Court medium.

Eglamore opens the great doors at the far end of the hall, and two figures enter, a tall figure with wooden arms, clad in a green cloak, accompanied by an oddly-coloured dog. The cloaked figure's hands creak, and he removes his hood to reveal the head of a wolf. The Headmaster is surprised at this, and wonders what this "General" has done to himself. The General does not reply. Parley and Smith walk up, and she attempts to welcome the General to the court, but he brushes it off, demanding to know where their medium is. Anja explains that she's dead, and Parley and Smith are training as their replacements. The General is not pleased that he is expected to talk with children.

Meanwhile, the canine figure sees Annie, and confuses her for her mother. He wants to know why they are saying Surma is dead. The blonde woman and the Headmaster look at Annie, and Parley tells her to get out there. Annie tells the dog-creature that Surma was her mother, and the creature laughs, assuming Eglamore to be Annie's father. He corrects the creature's assumption, stating that Anthony Carver is her father. The creature laughs again, and Annie asks him a question: is he the Coyote, the one from myth? Coyote answers in the affirmative, and conveys his sympathy for her mother's death, as he had forgotten how short human lives are.

Annie asks him about a myth where he saw how people were created, and tried to make his own, but laughed partway through. He admits it isn't one of his finer moments. And his creations had glass eyes because of it. The wolf-General interrupts, and Coyote introduces him as "Ysengrin, who is very impatient".

The Headmaster asks Ysengrin where he wants to begin, which is revealed to be with the death of one of the forest people that night on the bridge, at Sir Eglamore's hands. Eglamore responds that that was during an attack the Forest started. Annie asks Coyote if the shadow people of the Forest are his glass-eyed men, and he confirms this. Annie realizes that was why Muut was on the riverbank that night.

The Headmaster wants to know why it took Ysengrin so long to confront the Court about this matter. He responds that they had heard that one of the Court had fallen to their death that night, and had been content to leave it at that. They are here today about something far more serious: he pulls out the remains of the Tic-Toc bird that died that night on the riverbank, and throws it on the ground. Over the past several months, it had rooted itself into the ground, causing considerable damage. Ysengrin believes the Court put it there deliberately. Anja says no, because not even the Court knows where the birds come from. Ysengrin calls her a liar, and she says in response that they've wanted to capture one for a long time, and if they could just study the remains — Ysengrin crushes the dead Tic-Toc into dust and says they are in no position to make demands. He then announces, to the surprise of the Court staff, that they have proof that Anthony Carver planted the bird on the riverbank, the proof in question being a stained sweater with "A. Carver" written in it. Annie steps forward and admits the sweater is hers. Coyote admits the Forest dwellers aren't very good with human clothing. Ysengrin promptly accuses Annie of planting the bird, but she explains that the birds saved her life when she fell from the bridge. The Headmaster tells Ysengrin he must be content with that.

As Ysengrin growls, Reynardine, in wolf form, pops through a curtain and announces "You fools are making jackasses of yourselves!" He wants to know what Coyote is up to. Coyote is pleased to see him, telling him how good he looks and calling him "Cousin". Ysengrin is angry that Reynardine has taken the form of a wolf, to which he responds:

Reynardine: I'm more wolf than you are now. Look at yourself!
Ysengrin: You should admire this body Lord Coyote has gifted me with, Renard. Now the very trees of Gillitie are under my command!
Reynardine: I tremble in the presence of your terrifying skills of gardening, Ysengrin.

The Court gardener, in the crowd, snorts in amusement at that last sentence. Coyote asks Rey if he won't come back to the forest, but he says no, because Coyote knows how he feels about that. Also, he broke their laws, so he can't leave even if he wanted to. He also didn't appreciate the Forest's attempt at stealing him away on the bridge. Coyote believes that Rey isn't being honest, and suspects Annie has something to do with it. Rey tells him he doesn't know what he's talking about, and Coyote retorts that Rey could never resist a pretty girl, sticking his nose up Annie's skirt. Annie spanks him and calls him a bad dog, which enrages Ysengrin. He attacks her, but Reynardine jumps in front of her, and Mr. Donlan conjures up an array of shields in front of them both. Eglamore attacks the arm Ysengrin used to attack Annie with a sword, and Ysengrin sharpens the fingers of his other hand into talons with a psychotic grin.

At which point Coyote, having grown giant, yells "STOP!" and smacks Ysengrin into a wall. He apologizes for the fuss and invites Annie to come to the forest, to which she informs him he must forgive her if she doesn't immediately trust a trickster god. He laughs, picks up Ysengrin, and asks Eglamore for an escort from the Court.

Parley asks what just happened, and the blonde woman, Jones, says it was a fairly transparent ruse, as Ysengrin dropped some seeds during his attack. Mr. Donlan says he'll have some people look into them. The Headmaster asks Jones if she has any words of wisdom, and she says that Ysengrin draws ever closer to the brink of insanity, and the way he's distorted his body isn't quite like anything she's ever seen before. The Headmaster is disturbed. He tells Annie it's a pleasure to meet him, and reveals Janet, one of the other students in Annie's class, is his daughter.

The Headmaster: Tell me, do you find strange things seem to happen around you?
Annie: . . . on occasion.

Back at the Donlans, Kat asks Annie if she got into trouble. She didn't, and the headmaster told her she should meet with Parley and Andrew next year and take some lessons with them. Kat thinks it's cool that Annie gets to hang out with some older students. She asks Annie if she'll be okay spending the summer alone. Annie says it'll only be until her father contacts her, and she'll have Reynardine for company. Kat doesn't find that comforting, and tells Annie she should go see Mort because he looooves her. Kat tells Annie she thinks the summer won't be any fun without her.

When Annie returns to her bunk, Reynardine asks her if she isn't going to ask him what he did, what law he broke. She says she'll wait for him to tell her in his own time. She pulls out the photograph of her parents and Kat's parents and Eglamore from when they were students. Rey is surprised that she stole it, and she tells him to be quiet. She removes her makeup, and sits down with Rey, studying the photo.

"Thus ended my first year at Gunnerkrigg Court. And so I did wait for word from my father, unaware that I would not hear from him for over two years."