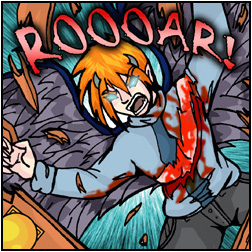 Bob in Emergency Exit shows his Superpowered Evil Side
Advertisement:

The characteristic bellow of a monster as it attacks, makes a warning display, or reacts to pain, rendered as onomatopoeia. Usually, but not always, because it is incapable of speech. Common in Comic Books, Webcomics and RPGs without voice acting; rare in Literature.

The Written Roar has some fairly standard versions, though the exact number of letters involved vary widely. There are several usual forms of the classic throaty roar, from the literal "Roar!" to the more guttural "Graar!" to the very common "Argh!" The related horrible screech has mostly been standardized around variations of "Scree!"

A subtrope of Written Sound Effect. One of the many faithful servants of the Rule of Cool.