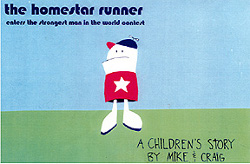 The original cover of the book that started it all
Advertisement:

The Homestar Runner, Pom Pom, Strong Bad, and three others enter the "Strongest Man in the World Contest". "Whoever holds the most grapes, wins." Strong Bad tries to cheat with the help of a furry yellow animal, from that point aptly named "The Cheat".

Strong Bad later made a revised edition of the story, retitled Strumstar Hammer, in the email "kids' book". The book was also spoofed in the 100th email "flashback", which in turn inspired Main Page 20. There were also plans for a sequel (Homestar Runner Goes For The Gold!), sketches for which appeared in the "Museum Sketchbook", but the idea was eventually scrapped until 2017 (20 years later). In addition, a modernized and animated version was made ten years later, just named "Strongest Man in the World", with newer versions of the characters reenacting the plot, with a few changes.

This book and its animated adaptation provide examples of: