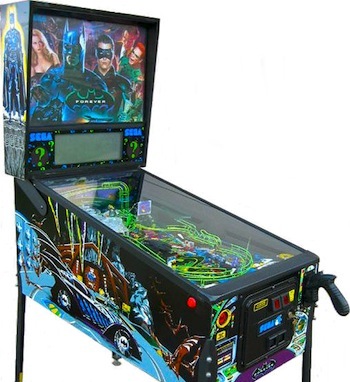 Two-Face: "Let's start this party with a bang!"
Advertisement:

Batman Forever is a licensed arcade pinball game designed by Paul Leslie and Joe Kaminkow. It was released by Sega Pinball in 1995, shortly after the movie was released into theaters.

Like its source, this is a very brash and flamboyant game, where the goal is to take down Two-Face and The Riddler by completing various scenes from the film. Go on a Gotham City crime spree, race the Batmobile across rooftops, survive the Brain Drain, and collect the Riddler's Mystery Boxes. You'll also get to defuse the bomb at the circus, lock pinballs in the Batcave, and launch pinballs from the Batwing at playfield targets. Complete all six Gotham Events, then light up the Bat Signals and match Two-Face's two heads for a chance at FOREVER, a multiball frenzy that lasts... as long as you can manage.

The game features sound clips from the movie, as well as new custom speech recorded specifically for the machine by Tommy Lee Jones (Two-Face) and Chris O'Donnell (Robin), and supports up to six players. It even includes a "doubles mode" where two-player teams compete against each other, and a "guaranteed minimum time" mode for beginners.

Although the movie received mixed reviews from filmgoers, Batman Forever is considered by players to be a blockbuster table — many consider it both one of Sega's best pinballs and the best Batman pinball from any manufacturer. The gameplay is fast and balanced, with a reasonably deep ruleset and skillful use of flowing ramps and looping shots throughout. Unfortunately, Sega's small marketshare and the movie's lackluster reception kept sales down; approximately 2,500 tables were produced, making this game an overlooked collector's item today.