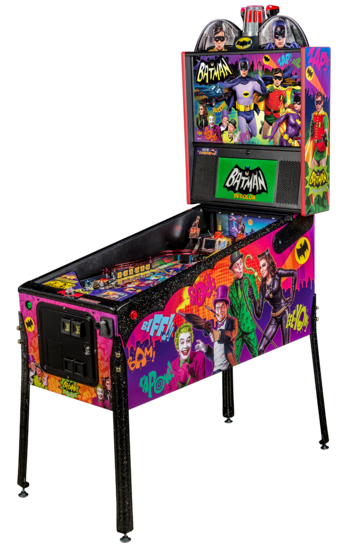 Batman 66 is a Physical Pinball Table designed by George Gomez and released by Stern Pinball in 2016. Based upon the iconic 1966-68 television series, its announcement coincided with both the show's 50th and Stern's 30th anniversaries.

Players must help the Dynamic Duo — Batman and Robin — to thwart crime in Gotham City. Answer the Batphone to one of four arch villains: Catwoman, The Joker, The Penguin, and The Riddler. Prime the TV to do battle with the likes of Bookworm, Mr. Freeze, The Mad Hatter, Shame, King Tut, and Egghead. Bash The Penguin's crane, collect Gadgets, spin the Batmobile, activate the Atomic Pile, and lock balls in the Batcave for multiball. Adam West and Burt Ward themselves guide you with custom speech.

The game utilizes most of the same playfield design from the 2008 Batman game, including the bashable crane toy. However, the major differences include faster ramps and the "Joker Reveal Mechanism" becoming a spinning turntable with three interactive areas: (1) a working "Villain Vision" television set, (2) a blinking Batphone, and (3) a spinning Batmobile hiding an Atomic Pile shot through the middle, Batcomputer and Bat Analyzer targets, and a Batcave ball lock.

Batman 66 comes in three different varieties: a "Premium", "Limited Edition" and "Super Limited Edition". Gameplay is unchanged among them, but the more expensive models have cosmetic differences, including unique artwork. The "Super LE" — the most expensive of them all — was limited to 50 units and exclusive to the most die-hard of Stern collectors. These games feature such perks as reflective foil cabinet graphics, powder-coated black and sparkled armor, extra toy Bat-Vehicles on the playfield, and a topper which projects the Bat Signal above the game.