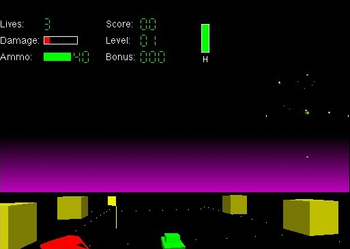 A series of first- / third-person shooter games, somewhat similar to Battlezone. The first game was released in 1991, for macOS. Subsequent games included Spectre Supreme (1992-3), Spectre VR (1993) and Spectre VR CD (1994), the latter 2 of which were ported to MS-DOS and Microsoft Windows. There was also Spectre for the Super NES, which differed considerably from the original game. In 2010, a remake known as Spectre 3D was released for Apple iOS, including all of the original levels and most of the sound effects, but with significantly upgraded graphics and a rather suicidal "Arcade" mode. This version sadly seems to have disappeared from the App Store, and it's future is uncertain. In 2022, the developers of that iOS game released an HTML5 Web Game adaptation of it, titled Spectre WEB, on their official websitenote in alpha test status as of June 2022.

The player controls a tank. Options for camera placement include a first-person view, a third-person view from above-and-behind the tank, a directly-overhead view that follows the tank around, and a long-distance directly-overhead view that shows the entire playing field. There's also a "radar" view in the upper right corner of the screen. The player is allowed to customize the stats of the tank at the beginning of the game, trading off between speed, hit points, and ammunition. In single-player mode, the object of the game is to collect all of the flags in order to proceed to the next level. There is also LAN-based multiplayer. Subsequent games in the series added special weapons (each of which becomes available upon reaching a specific level), additional enemy types, additional items/power-ups, and additional environmental features on the playing field.