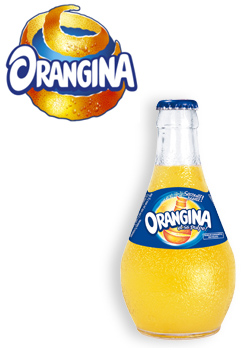 Orangina is a French carbonated beverage made from, well... oranges. The drink even has orange pulp in it, that's why they have the tag line "Naturally juicy!" They've expanded their flavors since then, with flavors of other citrus fruits. The product has appeared in other countries, notably in the United Kingdom and even in North Americanote American Orangina commercials came out in the late 1980s and early 1990s, and featured singer/dancers similar to Devo or the Talking Heads. They come in somewhat bulb-shaped bottles (though originally, they were made in an orange-shaped bottle). They also come in more typical packaging, like cans or larger plastic bottles.

Commercials? Well, back then, they varied. One involved a man and his angels, who ended up fighting over the drink

. Others involve men in Orangina suits

while... dancing. Or being used as a pinball machine ball

Of course, most people are more familiar with the newer commercials. You know, those certain

, originally supposed to air in late night. What it had was a bear with a leaf on his groin, a female octopus, chippendale chameleons and pumas, pole dancing in general, anthropomorphic plants, the soda splashing all over them... in other words, furries in a beach party. In fact, it had a cut version (the uncut was the one provided in the link), though the cut version itself still had some naughty stuff intact. The ads proved a sensation, and soon they sort of become their advertising icons, using some of the characters

◊ as an advertising on top of taxis and on posters, and they followed up with new ads with a (mostly) similar cast for their newer products. Some are less risqué, like the cowgirl ad (a female horse riding the Orangina bottle), while others are not subtle, like its accompanying Indian ad (a male cougar using the Orangina bottle...with an orgasmic look on his face). Recently, they made a series of ads that poke fun at various Commercial Tropes, with Orangina being a magical product being able to do X task! Most are safe for work, though the panda and the cougar (again!) crossed the line once more (the latter even became a bit controversial due to its homoerotic undertones).

You can view the new commercials in this