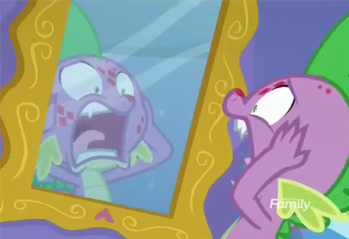 Spike is helping Rarity locate phoenix nests, as she needs some feathers for her next dress, but Spike tries to keep a "stone scale" on his face hidden from her. They run into Peewee, the phoenix chick Spike rescued and is now grown up, but the bird touches the stone scale, sending Spike into pain. Rarity suggests that the blemish will go away after a good night's sleep. However, when Twilight wakes him up after he's slept in late, Spike finds his entire body now covered by stone scales and is extremely itchy. Worse, he starts to uncontrollably breathe fire. Twilight suggests Spike spend the day outside instead.

Spike is moping in disguise by the Friendship School when Rarity comes back. He refuses to take off his disguise and quickly takes Pinkie Pie's place as a tour guide for the school to stay away from Rarity, fearing she'll reject him if she sees him like this. During the tour, Spike finds it difficult to control his voice, and has another incident with his fire breath, burning away his disguise. He rushes off to hide, but Smolder, having spotted Spike's problems, is able to find him hiding in a broom closet. She explains to Spike that he's going through the molt, a point all dragons experience, and warns him about another symptom, his body giving off an odor that could draw predators. Smolder tells him it is a sign of growing up after which the dragon's family forces them to live on their own. Spike starts to panic that Twilight will make him leave should he finish his molt.

Spike runs to Zecora to see if she has a cure. As she examines him, Rarity arrives, having become temporarily deaf due to working with the phoenix feathers. Spike hides, still not wanting Rarity to see him like this, and he quickly leaves the hut when Zecora creates a distraction for him. Rarity leaves after getting some medicine for her ears, and Zecora goes to look for Spike, only to discover him taking shelter from a giant roc that's been drawn to his odor. The roc grabs Zecora before Spike can stop her, and Spike gives chase and ends up running into Rarity. Rarity, still deaf, cannot understand Spike's warning until its too late, as the roc grabs her and Spike too. Spike tries to free them, but his random fire breath instead sends him flying, landing near Twilight who had come out to see Zecora about some anti-itching creme for Spike. Spike, his body intensely glowing and itching, quickly explains the situation and Twilight sets off to try to stop the roc with magic. Spike is able to follow when his body suddenly stops glowing. He is relieved for a moment before a stone casing encompasses him. After a moment, the casing falls off, and Spike finds he is now free of the stone scales, and has gotten a pair of wings as a result of the molt. After a bit of elation, he realizes his friends are in trouble, and, now able to fly, joins Twilight to help distract the roc to force it to drop Rarity and Zecora. The two save them from falling to the ground.

Twilight, Rarity, and Zecora admire Spike's wings, but Spike realizes that with the molt done, he should leave, but Twilight refuses to let him go, explaining that that dragon tradition doesn't apply in Equestria, and he is still a part of her family. On their return to Ponyville, Rarity convinces Spike, now able to hover higher, to help serve as a dress form for her phoenix outfits, a task he happily takes on.