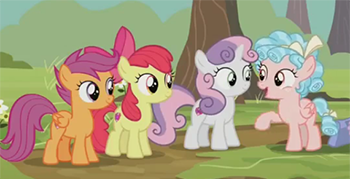 Getting Cozy with the Crusaders.
Written by Nicole Dubuc
Advertisement:

The Cutie Mark Crusaders, having heard about the Friendship School, go to secretly check it out. When they observe all the fun activities going on, they decide their normal Ponyville school is boring in comparison, and try to talk Twilight Sparkle into admitting them as students. However, Twilight tells them that they already know about friendship, so they should continue their normal studies with Cheerilee instead.

The three decide to fake that they do need friendship lessons, first by trying to convince their respective big sisters, and then faking an argument in front of Pinkie Pie and Fluttershy, but inadvertently let the ploy show through their friendship. Dejected, they go back to their clubhouse to plan, when they hear crying outside. They find a pegasus filly, Cozy Glow, who is a student at the Friendship School who has been struggling with the work, particularly with her current assignment of helping three Ponyville residents. The CMCs offer to help, and soon Cozy has successfully completed the task. Thankful for their help, she tells them that there's a big test coming up, and the CMC readily offer to help tutor her. Despite several bumps, they eventually get Cozy Glow up to speed and feel she's ready for the test.

On the day of the test, the CMCs wait near the school to hear the results, but Cozy Glow reveals she failed it. Not only that, Twilight demands to see the CMC in her office. There, Twilight tells them that she knew Cozy Glow was being tutored by them, and puts the blame on them for teaching Cozy Glow the wrong information as another ploy to get into the school. The CMCs try to be honest, but Twilight sends them back to Ponyville. Cozy Glow, having overheard this, goes to talk to Starlight Glimmer as the guidance counselor, and admits she purposely failed the test and blamed it on the CMCs, believing that it would have made Twilight enroll the Crusaders in the school to relearn their friendship lessons. Starlight lets Twilight know, and Twilight, in turn, brings the Crusaders to her office, along with the other Mane 6. Twilight explains what Cozy told Starlight, and the misunderstanding, and that in return, she officially announces them as honorary graduates of the school, and offers them the possibility of being tutors to any students that need it. The CMCs thank Twilight and the others, and go off to spend time with Cozy Glow, while Twilight thanks Starlight for being a good counselor.

Cozy Glow's answer to the question of who is the Princess of Friendship: This trope.

Cozy Glow's answer to the question of who is the Princess of Friendship: This trope.