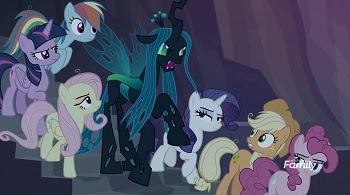 Chrysalis is back with a vengeance! But finding good minions is hard.
Written by Michael Vogel
Advertisement:

Twilight and her friends wait for a photographer from the Canterlot Historical Society before they can set out for a long-overdue camping trip in the Everfree Forest to spend time for themselves while taking time off from the School of Friendship. The photographer arrives, and rushes to primp up the group, secretly pulling a strand of hair from each, before snapping their picture. Pinkie points out the photographer missed Starlight Glimmer, and she reluctantly takes her photo too before leaving the mares confused. Outside the school, the photographer turns out to be a disguised ex Queen Chrysalis, who has a spell that, by using the photographs, the strands of hair, and a representation of the pony's cutie mark, is able to create a clone of that pony, which she does to create evil copies of the Mane Six from trees from the Everfree Forest. The Mean Six turn out to show opposite qualities of their counterparts — Mean Applejack lies, Mean Rarity is a hoarder, and so forth.

She tells the Mean Six that she has heard about an artifact of great power related to the Elements of Harmony somewhere in the forest that, as part of her revenge on Starlight for taking her hive away, she wants to use to create a new army of changelings and destroy the Mane Six and Starlight, but that they need to find it. Mean Twilight realizes that Chrysalis could have attacked the Mane Six while she was in their midst, and considers her weak; as Chrysalis leads them on the search, Mean Twilight tells the others they should split up to find it faster, and leave Chrysalis alone, and starts secretly planning with the other Mean Six to overpower Chrysalis when they find the article and keep the Elements' power all to themselves.

Meanwhile, the Mane Six and Starlight are working towards where Twilight has planned their camping experience, near the Tree of Harmony. Pinkie runs off ahead while Fluttershy falls back to help a chick fallen from its nest, resulting in the group getting separated from each other. At that moment, the various Mane Six and Mean Six ponies find each other in various incidents, but neither recognize the differences from their counterparts, instead thinking their friends are somehow acting like mean jerks out of nowhere, leading to several conflicts: Mean Rarity has horded all the supplies being carried by Mane Applejack and Mane Rainbow Dash; Mean Applejack criticizes Starlight's appearance, making her think she gave her the camping equipment for the sake of making fun of her; Mean Twilight causes Mane Fluttershy to break down in tears after she faces the wrath of the forest creatures terrorized by Mean Fluttershy, Mane Twilight starts thinking her friends don't like the trip when Mean Pinkie claims it to be a "boring, lame, no-fun retreat", and so forth. Importantly, Mane Pinkie tells Mean Twilight the history of their friendship and reveals the location of the Tree of Harmony to her.

Ultimately the Mean Six regroup under Chrysalis's watch and Mean Twilight directs her to the Tree, stopping only to ravage the campsite that Mane Twilight had already set up. At the Tree, she tells the others to prepare to use the Tree's power to overtake Chrysalis, who hears this; at the same time, the Elements begin to react to the doppelgängers' presence. Chrysalis and Mean Twilight end up in a magic battle while the others attack the Tree. The Tree reacts by grabbing all of the Mean Six with tendrils of light, holding them high, and reversing the spell, reducing them to dead wood. Chrysalis realizes her plan has failed, then once again swears revenge on Starlight and flees. Meanwhile, the Mane Six have also finally regrouped, but their various encounters with the Mean Six have left them bitter at each other. Twilight quickly stops the argument and reminds them all they are friends, and even though they're close, they can get on each other's nerves sometimes and get upset over their various quirks, but they know how to overcome them. The seven quickly rebond and continue onto the campsite, surprised to find it in ruins. They laugh it off and set about to fix it up as to enjoy the rest of the camping trip as Chrysalis flies off into the night sky.

When the mane ponies are at each other's throats for their camping trip being ruined due to all the misunderstandings caused by their clones, Twilight stops them and helps them make up, showing even the greatest of friends can get on each other's nerves sometimes and their friendship is strong enough to handle anything.

When the mane ponies are at each other's throats for their camping trip being ruined due to all the misunderstandings caused by their clones, Twilight stops them and helps them make up, showing even the greatest of friends can get on each other's nerves sometimes and their friendship is strong enough to handle anything.