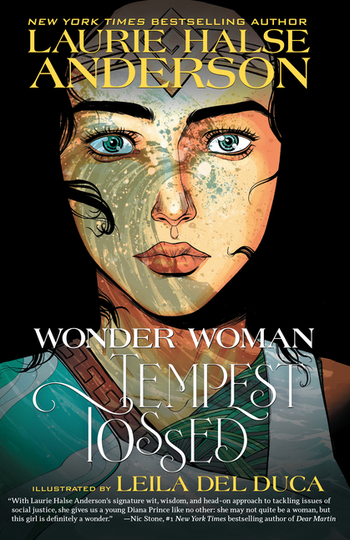 art by Leila del Duca
When the rules are wrong you have to break them. Especially when little ones are in trouble. Mothers Five keep the children alive.
—Diana
Advertisement:

Wonder Woman: Tempest Tossed is a graphic novel written by Laurie Halse Anderson with art by Leila del Duca, first published in 2020. It is part of DC Ink.

As the first and only child Amazon the Queen's daughter Diana feels out of place among her sisters, who were formed as adults and find the awkwardness of puberty mystifying and medically fascinating. She has been told by healers that she will probably be able to move on when she's sixteen as she will then be an adult and, in her mind, hopefully a proper Amazon. On the morning of her sixteenth born day she is ecstatic about this possibility, but learns the sobering news that the barrier around Themyscira has developed holes and breaks which need repair. She is concerned that this is a sign of the great evil the Amazons are meant to fight having returned, given the damage is caused by suffering and conflict in the outside world. Her elders tell her that such damage has occurred before and will be quickly repaired with any mortals who cross the barrier being given a memory erasing tea and sent on their way and that she has nothing to be concerned about as she and her home are protected by fully trained Amazons.

That night the dinner celebrating her birthday is interrupted with news that outsiders have landed on the shore. Diana is horrified to realize the people on the shore are helpless and those who arrived at the shore alive are fleeing into the woods from the armed warriors chasing them while carrying children. Her mother tries to reassure her again and tells her to leave, but she realizes that people are drowning and she leaps into the ocean to save them. She rescues all the living refugees in the water by helping them back into rafts, and discovers she has left the barrier and her home is therefore lost to her. Diana joins the refugees and is repulsed by the way they are treated in the Grecian refugee camp they end up in where she aids them as a translator. Her skill as a translator and ability to clearly give a detailed report on conditions in the camp catches the attention of two UN volunteers who are looking into living conditions at the camp and they offer to help her get to the United States and get proper documentation that will help give her more leverage to help the refugees. After some deliberation she takes them up on their offer.