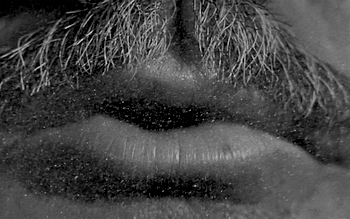 This is when a person's mouth and lips are pretty much all showing on the screen. Potentially it can be a sign of mystery, used to hide the identity of the person speaking. Otherwise it can just be to emphasize the mouth such as showing a pretty girl putting on lipstick.

This is a sister tropes of Eyedscreen, which features a screen shot of a pair of eyes. Compare Eat the Camera and Mouth Cam.