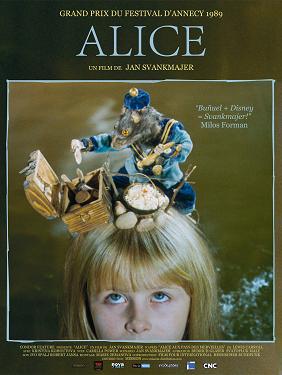 The cover almost makes it seem whimsical...
"Alice thought to herself 'Now you will see a film... made for children... perhaps...' But, I nearly forgot... you must... close your eyes... otherwise... you won't see anything."
Advertisement:

Něco z Alenky is a film, part live-action and part animation, made by Czech stop-motion animator Jan Švankmajer in 1988, called Alice outside of the Czech Republic.

This surrealist adaptation of Lewis Carroll's Alice's Adventures in Wonderland is remarkably faithful to the original work, condensing most of the dialogue but painstakingly preserving much of the plot. Where it really deviates is in the strange appearance of the Wonderland creatures and in the dreary atmosphere it evokes. Švankmajer's Wonderland is populated by speaking skeletons, sawdust-filled animals, and animated objects. The film is devoid of music, and all creatures are voiced by Alice herself, in jarring cutaway closeups of her mouth as she narrates their lines, and her adventure seems to entirely take place inside of an impossible, poorly-lit and labyrinthian house.

Though well-received by critics, it is not a popular version of the story. This may have something to do with a saturation of both grimmificationed and disneyfied Alice adaptations, despite it not quite falling into either category. It also has quite frightening, but amazing imagery, which has made it a Cult Classic. Terry Gilliam said: "Jan Svankmajer's stop-motion work uses familiar, unremarkable objects in a way which is deeply disturbing. The first film of his that I saw was Alice, and I was extremely unsettled by the image of an animated rabbit which had real fur and real eyes. His films always leave me with mixed feelings, but they all have moments that really get to me; moments that evoke the nightmarish spectre of seeing commonplace things coming unexpectedly to life."