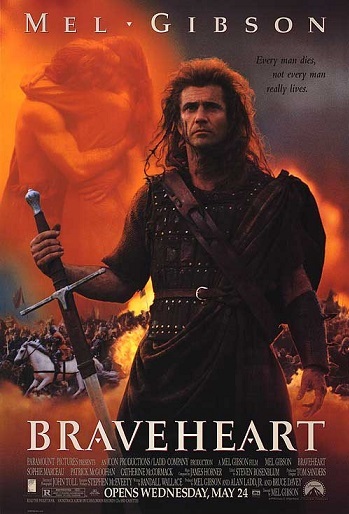 Every man dies, but not every man really lives.
"Now tell me, what does that mean, to be noble? Your title gives you claim to the throne of our country, but men don't follow titles, they follow courage."
— William Wallace
Advertisement:

A 1995 film directed by, produced by, and starring Mel Gibson, and written by Randall Wallace, a self-proclaimed Real Life descendant of the main character. Braveheart tells the extremely fictionalized story of the legendary Scottish rebel William Wallace and his revolution against King Edward the Longshanks of England, in which he battled for the freedom of Scotland, even though it led to his death. This film is infamous among historians for its many inaccuracies and creative liberties.

Wallace starts as a simple farmer who only wants to live a peaceful life with his beloved wife Murron (Catherine McCormack), despite his father's death at the hands of the English. Unfortunately, he stops the rape of his wife by marauding English soldiers, and after the English magistrate executes her in retaliation, Wallace takes the fight to the English authorities, with the rest of his country following suit. As the whole of Scotland is drawn into the rebellion against England, Wallace takes command of the Scottish army to kick ass... for FREEDOM!

The cast also includes Patrick McGoohan as Edward I "Longshanks", King of England, Peter Hanly as a young Edward II, Sophie Marceau as Princess Isabella of France, and Angus Macfadyen as Robert the Bruce (later King of Scotland). The film won five awards at the 1995 Academy Awards, including Best Picture.