Fanfic / Deliver Us from Evil Series

"I've always trusted your intuition."
"Then trust this: no matter how far and how long we are separated, we shall always come back to each other. That is more than an intuition, my dear fellow — that is a promise." 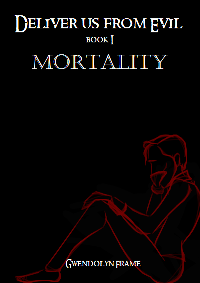 He looks so lonely...
Advertisement:

Deliver Us from Evil is a Sherlockian fanfic series-in-progress by Aleine Skyfire, a.k.a. Gwendolyn Frame. The projected five-book series is based on the events of Sherlock Holmes short stories "The Adventure of the Dying Detective", "The Final Problem" and "The Adventure of the Empty House". Essentially, the series revolves around the peak of Sherlock Holmes's conflict with Professor Moriarty and his criminal empire. The novels with their working titles and taglines are as follows (and will be updated as needed):

The FF.N summary for Mortality is: In November 1890, a murder investigation sparks off a chain of events that will end at a Swiss waterfall. Scotland Yard and Watson struggle to stop Moriarty's most devastating plan: the destruction of Sherlock Holmes. First in a series.

There are also a series of non-linear one-shots

that form an expiremental continuity for the series. Mortality itself is based off of a story arc in the author's self-published ebook

, At the Mercy of the Mind

Note: Currently under a massive re-write, pending the writing of world-building prequels.

open/close all folders
Tropes Common in the Series
Mortality
The Road to Reichenbach
One-Shots
"Our Father… Who art in Heaven… hallowed be Thy name. Thy kingdom come, Thy… will be done, in Earth as it is in Heaven. Give us… this day our daily bread, and forgive us our debts… as we forgive our debtors. And lead us not into temptation, but… deli — oh, dear God, deliver us from evil! For Thine is the kingdom, and the power, and the glory forever. Amen."