Theatre / The Secret of Sherlock Holmes 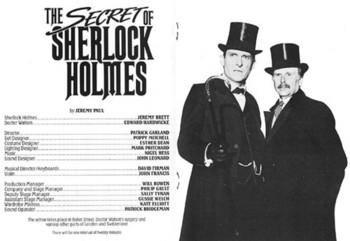 The Secret of Sherlock Holmes is a play by Jeremy Paul, one of the script writers of the famous Granada series. The original production starred Jeremy Brett and his second Watson, Edward Hardwicke, in 1988 at Wyndham Theatre. In the summer of 2010, the play was revived at the Duchess Theatre in the West End. It was directed by Robin Hereford and starred Peter Egan and Robert Daws as Holmes and Watson, respectively.

This two-man play is neither an adventure nor a whodunnit, but rather a tribute to the remarkable friendship of Sherlock Holmes and Dr. Watson. It is one hour long and divided into two Acts: Act I covers the friendship from their meeting in A Study in Scarlet to Holmes's faked death in "The Final Problem", while Act II deals with the friendship strained by Holmes's deception, as well as the titular secret.

The last remnant of the play exists in the form of an audio recording made by Brett's close friends. An amateur restoration of Act I can be heard here

and Act II is here