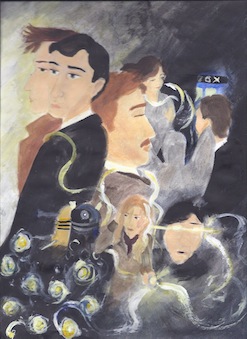 One Time Lord. One Great Detective. Two obsessed fanfiction writers…
There are things called Fixed Points in Time. They're events—births, deaths, decisions— that must always happen. They must always happen, no matter what... or Time will start to fold in on itself. Things like the signing of the Magna Carta, or Columbus's discovery of the New World... Or a certain meeting at St. Bart's, in 1881.
— the Tenth Doctor
Advertisement:

Children of Time is a Sherlock Holmes/Doctor Who crossover series, providing an AU to Season or Series 3 of Nu Who, "exploring what might happen if Holmes and Watson were substituted for Martha Jones as the Doctor’s full-time companions". The series is a collaboration by Aleine Skyfire

The series is currently in-progress on FF.N. Most of the following pages here on TV Tropes contain spoilers to kingdom come, as the groundwork for the series was laid out well in advance of the publishing. Read at your own peril.

This Series Provides Examples of: