Fanfic / A Study in Regret 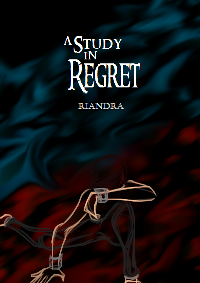 Watson won't be coming to the rescue this time...

, is an AU to the events of the Sherlock Holmes short story "The Final Problem". The FF.N

summary is as follows: Dedicated to Aleine Skyfire

. What if events had turned out for the worst after Moriarty's death at Reichenbach? Character death, drug and torture references.

When the fic opens, Colonel Sebastian Moran has already murdered Dr. Watson at the Reichenbach Falls. Sherlock Holmes is now Moran's prisoner, and is being constantly "punished" for the death of Professor Moriarty. Not all hope is lost, however, for Inspector Lestrade and Mary Watson are on the case, and they're determined not to fail.

The story expanded into a duology, with the first part completed and available in printed glory here

on Amazon. The sequel was started in 2014 on FFN as The Final Solution

, but was abandoned after two chapters.