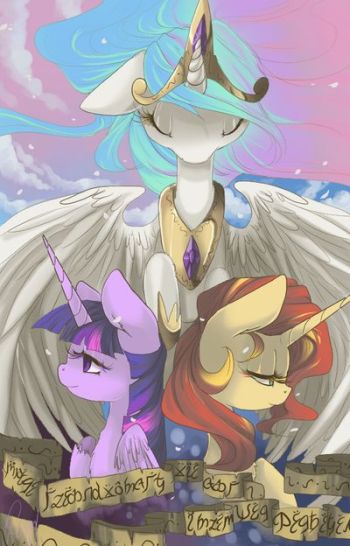 is a My Little Pony: Friendship Is Magic fanfic, written by The Albinocorn.

The fic opens with Canterlot under attack from some evil force, the city in ruins and the castle crumbling. Sunset Shimmer, faithful student to Princess Twilight Sparkle, is instructed to run to the Star Swirl the Bearded wing and use a relic there to travel back in time fifty years, and once there destroy the "Dark Regalia". Sunset follows her orders and arrives in Equestria shortly after Twilight's ascension and coronation at the end of Season 3.

Convincing the past version of her mentor of her true intentions, the group discovers what Future!Twilight meant: an evil pony named Vesper Radiance is seeking the Dark Regalia that can transform a normal pony into an alicorn. Somehow, the Dark Regalia — the Alicorn Amulet, the Tempest Crown, and the Obsidian Hoofguards — are responsible for the chaos that will happen in the future, and it's up to Twilight, Sunset, and their friends to stop it. Along the way through, Sunset is plagued by odd dreams and a voice whispering in her head, and not all is what it seems, especially once they come face-to-face with Vesper Radiance.

The fic focuses on a completely alternative take of Sunset Shimmer, disregarding Equestria Girls to build its own story around the concept of Sunset Shimmer rather than the canon's depiction.