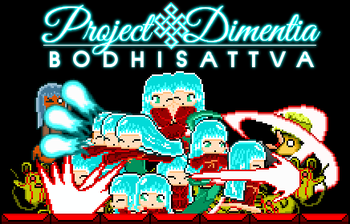 The game character, Aqua: there are more of Aquas where she came from.
Advertisement:

At the start of the game it features an Asura named Aqua who is starting to fight against villains from skateboarders with pink afros, to crazy catgirl boss with her clones, to a crazy baronexic baroness named Nisha. After encountering her, you must complete the other three stages to fight her again.