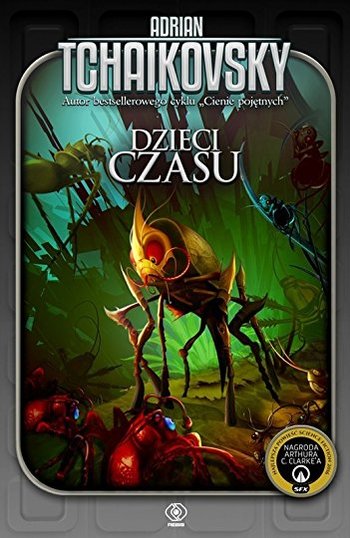 A 2015 science-fiction novel by Adrian Tchaikovsky which combines a convincingly alien society with a compelling story about the last humans left after the desolation of Earth.

The story starts with a brief glimpse of the human race at its technological peak: a society with the power and reach to travel to other solar systems, terraform worlds, integrate technology with their own minds, and begin a project to create a new intelligent race by uplifting monkeys on one of their terraformed planets. Unfortunately, it doesn't last. And then the real story starts.

Thousands of years after the fall of the "Empire", as the historians call it, an ark ship from a dead Earth is desperately seeking a hospitable planet to serve as a new home for the tens of thousands of people it carries in suspended animation. Their technology is cobbled together from what they could scavenge from the Empire, their goal is to find one of the terraformed planets that historians think may have been left behind, and the stakes are very, very high: they have nothing to go back to and no idea if any of the other Ark ships have survived. The green, growing planet they are approaching seems like their very own Eden.

However, thanks to one desperate, determined scientist, and thousands of years of patient evolution, the new world is already home to a race of thinking creatures - with a powerful, xenophobic guardian. And no, they're not monkeys. They have more legs. Eight, to be precise...

The novel intersperses the evolutionary and cultural history of a race of giant spiders with the story of desperate human survivors trying to find a home. You might be surprised by which ones you end up rooting for.

Children of Ruin is a sequel that was released in 2019. These books have no connection to the Shadows of the Apt series, except Adrian Tchaikovsky's love for (and extensive knowledge of) invertebrates.

Children of Time contains examples of: