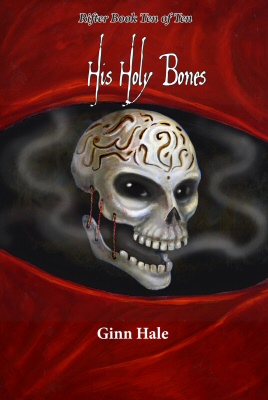 The cover of Part 10 of the serial.
Advertisement:

A serial novel by Ginn Hale, published over the course of 2011.

By all appearances, John is an ordinary American gay man, a quiet ecologist whose only peculiarity is his unusually intense feeling of connection to the earth and living things. He shares a house with the very non-ordinary Kyle, a heavily scarred, knife-carrying man who frequently acts like an alien to planet Earth. Kyle is actually the Kahlil, a priest in the religion of the Earth’s sister-world Basawar, who’s been sent to Nayeshi (as the Basawar priests call Earth) to retrieve the Rifter, a human incarnation of the creator god Parfir, who the Payshmura church can use as an immensely destructive weapon against their enemies.

John intercepts a key sent to Kyle and unknowingly opens a gate to Basawar, dropping himself, along with his friends Laurie and Bill, into a strange, hostile world. As they struggle to survive and search for a way home, they are discovered and befriended by a young Payshmura priest, Ravishan, who’s at the monastery of Rathal’pesha, where he leads a brutal and lonely existence. Ravishan is training as an ushiri: he opens and moves through the Grey Space, rifts in the fabric of space and time; he may ultimately qualify to become a Kahlil. John goes to Rathal’pesha where he suspects there may be a chance to get back to Nayeshi. It’s not easy, however; for one thing, Ravishan is falling in love with John (and vice versa) whereas Payshmura law punishes homosexuality with death. Meanwhile there are rumors of a menace from rebels known as Fai’daum. And John is gradually realizing that he is the Rifter...

Kyle/Kahlil has pursued John through the gate, but he hasn’t ended up in the same place and time; instead, he lands, with confused memories, years into the future, and finds that history doesn’t seem to have happened like he remembers it. During the time that he recalls serving the Payshmura church, it seems that the church was instead destroyed utterly. Now aristocratic factions are maneuvering for a place in the vacuum of power it left behind, and the Fai’daum have formed a new state near the gaping chasm that is all that is left of the entire northern part of the continent where Rathal’pesha used to stand. For a while, Kahlil survives by being employed as an assassin, using his ability to manipulate the Grey Space. But then his life is changed by meeting the Fai’daum leader Jath’ibaye.

The Rifter provides examples of: