Manga / Ms. Vampire Who Lives in My Neighborhood 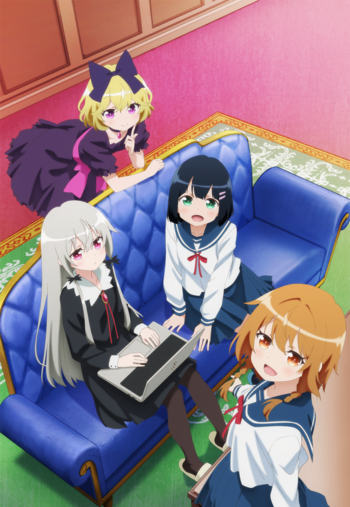 Ms. Vampire Who Lives in My Neighborhood (となりの吸血鬼さん Tonari no Kyūketsuki-san) is a manga series by Amatou. It centers around Sophie Twilight, a 360-year-old vampire girl who is a sweet-natured otaku who would never hurt anyone else. One day she gets visited by a schoolgirl named Akari Amano who was looking for the place known as the dollhouse (and a living doll-which turns out to be Sophie), actually the mansion where she lives. Akari quickly takes a liking for Sophie over her doll-like appearance, starting to live with her and wanting to pamper her and dote on how cute she is. Hilarity ensues.

The series is a four-panel manga series which was serialized in Comic Cune's October 2014 issue released on August 27, 2014. An TV anime adaptation co-animated by Studio Gokumi and AXsiZ began airing in Japan from October 5, 2018 on AT-X and other channels.

Ms. Vampire Who Tropes in My Neighborhood: