"Even death can't cure idiocy."
— Yoshiko in episode 2 of the anime 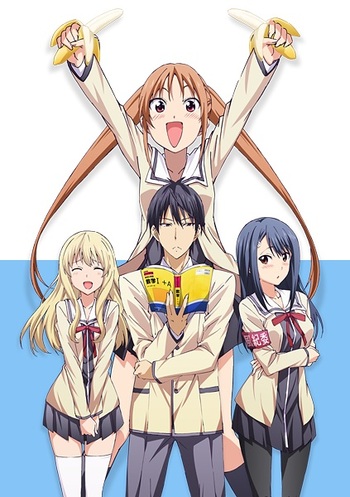 The human embodiment of Ignorance Is Bliss
Advertisement:

Yoshiko Hanabatake is a high-school girl, and she is stupid. Like, a get-all-zeroes-on-multiple-choice-tests level of stupid. The only person who is close to her initially is Akuru "A-kun" Akutsu, a genius and Yoshiko's long-suffering childhood friend. At the tearful pleas of Yoshiko's mother, Akuru vows to make Yoshiko mentally evolve to "at least something human-like". Along the way, they are joined by a couple other girls—Sayaka Sumino, the class sweetheart submissive enough to put up with Yoshiko; and "Fuuki Iinchou", the supposedly tough disciplinarian who may be more of a pervert than she lets on—as they probe deeper into the true meaning of idiocy.

Aho Girl (アホガール, "Idiot Girl") is a 2012-2017 gag yonkoma series hitting hard on the frontline between smartness and stupidity, written and illustrated by Hiroyuki (The Comic Artist and His Assistants, Doujin Work), originally serialized in Weekly Shōnen Magazine on November 28, 2012 and then moved to Bessatsu Shonen Magazine in July 2015. In 2017, it was officially licensed in English by Kodansha Comics, and ended in December of the same year at 12 volumes.

The series received an anime adaptation directed by Keizou Kusakawa and released by Diomedea on July 4, 2017 as part of the Summer 2017 Anime season. The anime is available for streaming on Crunchyroll

Revenge of the Banana Girl

Yoshiko confronts a delinquent and his gang for insulting the Banana Frappucino Deluxe, showing them just how awesome bananas can be.

Revenge of the Banana Girl

Yoshiko confronts a delinquent and his gang for insulting the Banana Frappucino Deluxe, showing them just how awesome bananas can be.