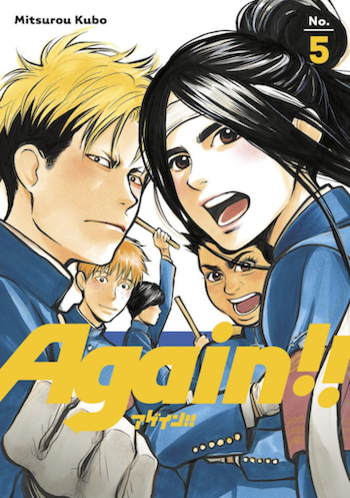 Imamura Kinichiro is graduating from high school, having spent the entirety of his high school career without joining a club or making any friends. On sudden impulse Imamura visits the room occupied by the Cheer Club (ouendan in Japanese) before it closed for lack of members his freshman year. A misunderstanding with fellow graduate Fujieda Aki seemingly results in a fatal accident for both of them... until Imamura wakes up on his first day of high school. Thinking it nothing more than a Dying Dream, he goes through his first day of school for a second time, but before he can put himself back on the path to have a miserable three years he tells cheer club captain Usami the words he never could in his first loop: "The Cheering Squad... is it fun?".

Again!! is a manga by Mitsurou Kubo about the spirit of the Japanese ouendan, time travel, high school, youth and second chances. It originally ran from 2011 to 2014 in Weekly Shonen Magazine, and received an official English translation in February 2018 by Kodansha USA.