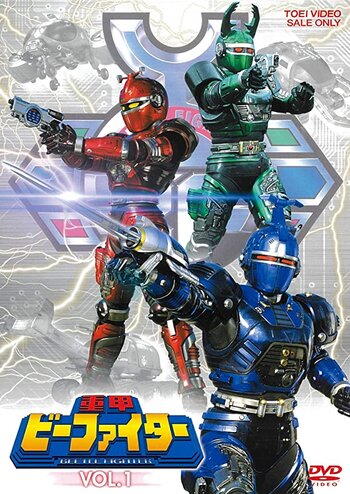 Three typical average scientists.
Juukou B-Fighter is Toei's 14th entry in its Metal Heroes series, and the first of its B-Fighter series. Its footage was used to create Big Bad Beetleborgs. Unlike its predecessor, it is military themed.
Advertisement:

Whilst investigating a sudden mass swarming of insects, researcher Takuya Kai of the Earth Academia meets the mystical Insect Elder Guru. He tells him that the insects sense the invasion of the extra-dimensional Jamahl Empire, and are preparing to fight them. With Guru's help, Takuya and his mentor Professor Mukai develop three Power Armor suits infused with the power of beetles. One suit is entrusted to Takuya, the other two to Daisaku Katagiri and Rei Hayama. They become the B-Fighters, who regularly oppose the schemes of Jamahl and its three generals.