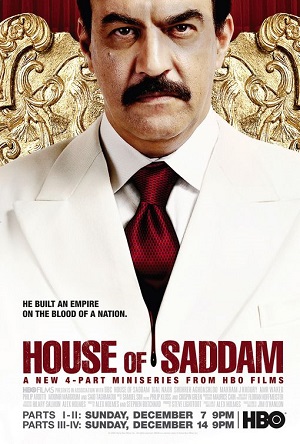 House of Saddam is a 2008 miniseries joint-produced by BBC Television and HBO Films. Described by as "The Sopranos with Scud Missiles," the series chronicles the rise and fall of Saddam Hussein (Igal Naor), but also the lives of his family, which consists of his long-suffering wife Sajidah (Shohreh Aghdashloo), his sons Uday and Qusay (Phillip Arditti and Mounir Margoum), his daughters Raghad, Hana, and Halah (Agni Scott, Shivani Ghai, and Amber Rose Revah), and his mistress Samira (Christine Stephen-Daly), who later becomes his second wife, as well as those in his inner circle.