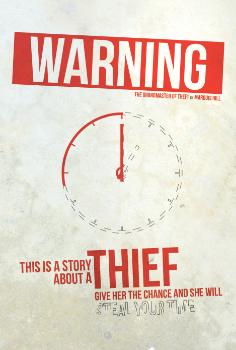 “The reality I’ve found is that sometimes doing what’s conventionally considered good – being friendly, adhering to the laws, showing mercy, telling the truth – is not enough to ensure that the right things occur. Sometimes the only options people are left with are to either yield to their tormentors, to allow them to prosper in spite of why they’re prospering, or to do something ‘bad’ to set things right. It’s when predicaments such as these arise that we become a factor. We’re ‘the villains’ so people like you don’t have to be.”
— Cassidy Cain

The Grandmaster of Theft series is a Criminal Procedural which follows the life & adventures of Cassidy Cain, the titular Lady Thief. Initially just a phantom thief who targeted white collar criminals, con artists, and the like to assist their victims or expose their transgression, one of Cass’ jobs finds her contending with a criminal mastermind far beyond her usual escapades. The end result of this conflict compels Cassidy to make them pay for what they've done.

To do so, she expands her own operations to form The Grandmaster Gang. She has the crew take on various jobs, partially to assist the various victims out there who cannot depend on the law and partially to strengthen and prepare her organization for Deus. Of course, cultivating a true team isn’t easy when there is pressure from both sides of the law, not to mention within the crew itself.

The first story, The Confessions of Cassidy Cain, can be read here.

This series wouldn't deserve to be called The Grandmaster of Theft if it didn't contain the following tropes: