Web Video / Two of These People Are Lying 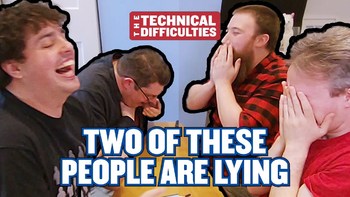 The thumbnail of the first episode, warning the viewers of what's to come...
"This is the Technical Difficulties, and we are playing 'Two of These People Are Lying,' because two of these people will be."
Advertisement:

Two of These People are Lying

is a web series by The Technical Difficulties, and a Spiritual Successor to their Citation Needed series. The series has so far run for three seasons, and a holiday-themed pair of specials.

The basic premise is that the three members of The Technical Difficulties crew - Gary Brannan, Matt Gray, and Chris Joel - each all have to pick and remember a Wikipedia article and write down the articles' title in a small pile of cards. Tom Scott then pulls one article title out of the pile at random and ask each of the participants what the article is. Each of them will claim that they know what the article is about, but two of them will be...well...lying, and they have to bluff their way through the round since they (ideally) haven't actually read it themselves. Tom has to guess which person is telling the truth, and the person who bluffs the best gets a point if they fool Tom, and if Tom guesses correctly who's article it was, he gets a point instead. There is a scoring system, but none of the participants are keeping track, and, according to Tom, "you shouldn't have, either".

Like a lot of media in 2020, the show went on hiatus due to COVID-19 making production difficultnote Chris and Gary live in different parts of the UK to Matt and Tom, with all but Tom having traditional day jobs, and so there's limited windows of opportunity for all of them to gather in one place and record, especially as the UK Lockdowns for COVID-19 discouraged travelling, making one member meeting up with any other member prohibitively tricky. However, a pair of festive specials was released on Christmas Eve and New Years Eve 2021, with comments in the latter video confirming the end of the series.

Compare with Trust Me, I'm a Game Show Host, which has a similar premise, only with game show host trivia, rather than almost-random Wikipedia articles. Also compare with Would I Lie to You?, another show about deception and facts, but with the guests in the studio, not The Other Wiki.

Do note that since the show is about deception, bluffing, and counter-bluffing, the trope list below will be full of unintended and unmarked spoilers, so be warned! Now has a recap page in progress.

Two of These People are Troping:

We still don't have an outro.
Yep!