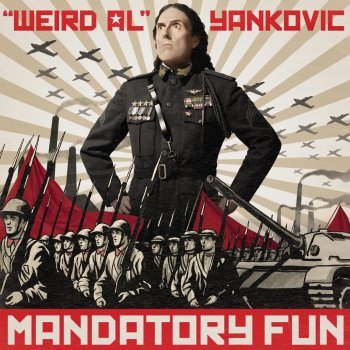 Mandatory Fun is the fourteenth and final studio album by "Weird Al" Yankovic, released in 2014. It's the first comedy album to debut at #1 on the Billboard Album Charts since Allan Sherman's My Son, The Nut.

With this album, Al fulfilled his contract to his record label and announced that he would no longer be releasing studio albums. Feeling that the landscape of satire had changed so drastically with the internet, he realized that waiting to have a whole album's worth of songs wasn't practical when his material relied so much on relevance. He has since said that all of his future recordings will be released through digital EPs and singles.

This was also Al's first album to utilize the internet for promotion. A week before the album's official release, eight of the album's twelve tracks had music videos released, each on a different website.

Now that's what I call tropes!

''The pervasion of fun exists except for the lack of fun.''
Feedback

Exactly What It Says On The Tin.

Exactly What It Says On The Tin.