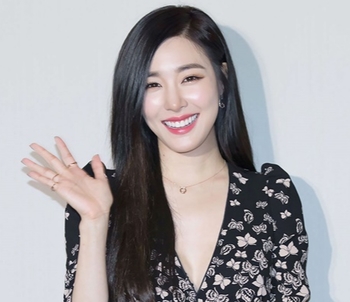 The eye-smile queen, doing what she does best.
Advertisement:

Stephanie Young Hwang (born August 1, 1989), better known as Tiffany Young or mononymously Tiffany in South Korea, is an American singer, actress, and model. Born in San Francisco, California and raised in Los Angeles, she moved to South Korea at age 15 to pursue a career in Korean Pop Music, ending up at SM Entertainment. She debuted as a member of Girls' Generation in 2007 and the subunit TaeTiSeo in 2012.

In 2017, Tiffany left SM Entertainment to embark on a solo career in the United States, releasing her English-language debut Lips On Lips in 2019. While she is no longer with the same record label, she remains an official member of Girls' Generation.

Not to be confused with 1980s pop star Tiffany Darwish.note who also promotes mononymously as Tiffany