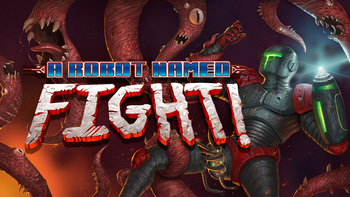 Millennia of peace have passed since the mechanical gods ascended, leaving the lower order robots to cultivate the world.
But something forgotten and terrible now stirs amidst the stars...

A Robot Named Fight! is a Roguelike developed by one Matt Bitner and released in 2017. You play as the eponymous robot, named Fight, as they seek to take on a horrible, moon-sized creature known only as The Megabeast as it lays siege to their world in the absence of its protection by the mechanical gods, raining twisted organic creatures down upon the planet in a seemingly unstoppable plague of meat. Coined as a "Metrogue" specifically, the game plays very much like 2D entries in the Metroid franchise, featuring procedural generation of its maps and items as you fight your way down through the tunnel systems of the planet, fighting disgusting meat-creatures as you search for the relics of wartime to "become fight enough" to take on the Megabeast.

The game, as of now, is receiving regular bugfixes and balance changes to pretty much everything.