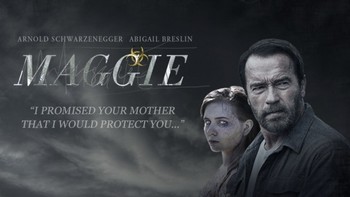 A father's duty is to protect his daughter
Advertisement:

In the wake of a Zombie Apocalypse, young Maggie Vogel is bitten and infected by the Necroambulist virus, which slowly turns her into a cannibalistic zombie. She runs away to protect her family, while her father, Wade, searches for her.

The film stars Arnold Schwarzenegger and Abigail Breslin in the main roles. It was due to premier at the 2014 Toronto International Film Festival, but after Lionsgate bought the distribution rights, was eventually released at the 2015 Tribeca Film Festival, before seeing a limited theatrical release.