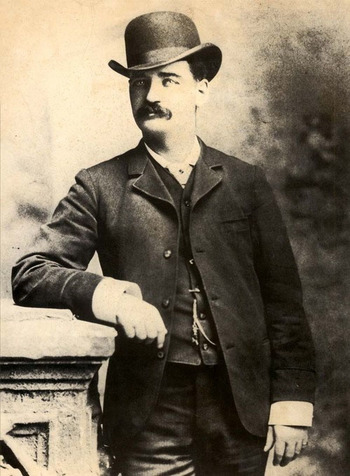 Bartholemew William Barclay "Bat" Masterson (November 26, 1853 – October 25, 1921) was a U.S. Army scout, lawman, professional gambler, and journalist known for his exploits in the 19th and early 20th-century American Old West. He was born to a working-class Irish family in Quebec, but he moved to the Western frontier as a young man and quickly distinguished himself as a buffalo hunter, civilian scout, and Indian fighter on the Great Plains. He later earned fame as a gunfighter and sheriff in Dodge City, Kansas, during which time he was involved in several notable shootouts.

By the mid-1880s, Masterson moved to Denver, Colorado, and established himself as a "sporting man" or Professional Gambler. He took an interest in prizefighting and became a leading authority on the sport, attending almost every important match and title fight in the United States from the 1880s until his death in 1921. He moved to New York City in 1902 and spent the rest of his life there as a reporter and columnist for the New York Morning Telegraph. His column covered boxing and other sports, and it frequently gave his opinions on crime, war, politics, and other topics, as well. He became a close friend of President Theodore Roosevelt and was one of the "White House Gunfighters" who received federal appointments from Roosevelt, along with Pat Garrett and Ben Daniels.

By the time of his death in 1921, Masterson was known throughout the country as a leading sports writer and celebrity. He is remembered today for his connection to many of the Wild West's most iconic people, places, and events, and his life and likeness are frequently depicted in American popular culture.