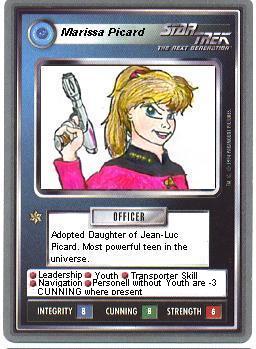 In late 1993, one Stephen Ratliff wrote a Star Trek: The Next Generation Fix Fic to rescue the alternate-timeline Tasha Yar and redeem her half-Romulan daughter Sela, and posted it to the Usenet group alt.startrek.creative. As a B-plot, Ratliff took several of the minor preteen characters who appeared in single episodes of the series—notably including Marissa Flores and Jay Gordon from the episode "Disaster", Clara Sutter of "Imaginary Friend", and Worf's son Alexander—and gave them the keys to the Enterprise's saucer while the grown-ups were away.

It seems that since their canonical appearances these ambitious kiddies have been playing at being Starfleet officers in the holodeck, and it turns out they all had fantastic survival times in the Kobayashi Maru simulation — better even than Data's — so no less than Spock himself gives the plan the A-OK.

They managed to singlehandedly defeat Cardassian Gul Dukat trying to invade Earth (with exactly one ship), humiliating him by burning "I was beaten by a bunch of kids" on the hull of his disabled invasion fleet. Picard & company bring Tasha and Sela back after swinging by The Original Series, and that's the end.

Except that Ratliff took a shine to his "Kid's Crew", and brought them back to headline his other fanfic. His favorite was the captain of the crew, Marissa Flores. He renamed her (probably not intentionally) 'Marrissa Floras', cured her canonical timid diffidence really quick, had Captain Picard adopt her after her real parents met the fate of all redshirts, and sent her rising swiftly through the ranks until she became a fully commissioned starship captain while still a preteen. Shortly before which she had been discovered to be the long-lost princess and heir of a small planet (itself apparently a colony of the United Kingdom).

And she was placed in charge of Starfleet by the time she was twenty-one. And won the Triple Crown. And was instrumental in finally bringing Picard and Doctor Crusher together. And... well, Marissa doesn't like overly long titles.

Just read the stories. Most of them can be found MSTed here

. The FanFiction Critic has reviewed Field Trip and Enterprized.

Absolutely no relation to Marrissa Roberts. note Doombly claims that his Marrissa was named after Stephen's Marissa, but otherwise the two girls are different.

The story was published before Eternal September, a Newbie Boom for the Internet that occurred in 1993. The stories have become somewhat infamous online for the Improbable Age of the main characters and the out-of-character behaviour of characters like Picard. As such, the stories have become popular with people reading them ironically, in a similar vein to My Immortal.