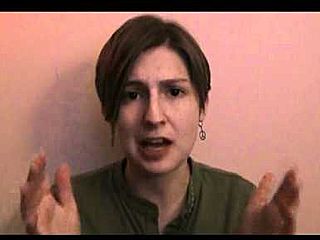 "I'm the FanFiction Critic, and this is what you do with a B.A. in English!"
"In the future, if I happen to review your fanfiction, I'm not doing it to insult you; I'm making fun of your poor writing skills."
— Episode 1 "Disney Seven"
Advertisement:

The FanFiction Critic is a former reviewer on YouTube. Her forte was Exactly What It Says on the Tin, bad fanfics. But not just any bad fanfics, no. She reviewed some of the worst fanfics out there, armed only with her sarcasm and her never-ending fountain of Shout Outs to things much, much better than the things she reviewed.

Her YouTube channel has been closed. She used to have a blip.tv channel, but it has since been deleted.

Not to be confused with The Fanfic Critic, although the two of them are friends.

The FanFiction Critic provides examples of the following tropes: