Fanfic / ITS MY LIFE! 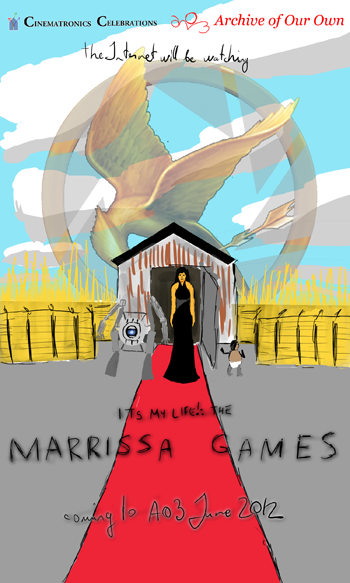 Yes, those two had a child. That is the sort of logic you have to deal with in Marissa's stories. (Artwork by ASBusinessMagnet)
Advertisement:

ITS MY LIFE! is perhaps the most infamous Portal fanfic, and has been compared to My Immortal and the like. It begins by telling the story of Marrissa Roberts, a test subject in "Portal Labs" who is seemingly Chell's sister, has "speshul powers" and is somehow pregnant with Wheatly's "robot ball/human baby", putting her against the "goth emo" GLaDOS and the drugs-smoking and beer-drinking Atlas and P-Boy. And that's just the first chapter. Along its course it also involves copious British insults, time travel to a High School AU version of the past of Portal Labs with inexplicable appearances of the Team Fortress 2 characters, evil twins, evil clones and a fusion of Chell and GLaDOS.

While it was signed by "MarrissaTheWriter", its authorship was eventually claimed by Doombly, better known to the Troll Fic world as Sue Mary.

Due to its popularity, it has spawned a series, named ADVENTURES OFF MARRISSA ROBERTS, which ends up touching on many more fandoms than just Portal:

There are also two stories by MarissaTheWriter that are not set in the ITS MY LIFE! continuity, Invader Zim: Born Again Christian and Real Beauty

Links to the fan fictions:

Due to their notoriety, they have gained... various following. The many varieties of MarissaTheWriter fan content include, but are not limited to:

Compare My Immortal, My Inner Life, Light and Dark The Adventures of Dark Yagami, Half-Life: Full Life Consequences, Quarter-Life: Halfway to Destruction, Marissa Picard. Not to be confused with a certain Bon Jovi song

Nor is it related to the PBS Kids website.

The ITS MY LIFE! series provides examples of:

The various fanworks of ITS MY LIFE! (excluding those by ASBusinessMagnet, which have their own page) provide examples of: