Fanfic / Being Human A Portal Fanfic 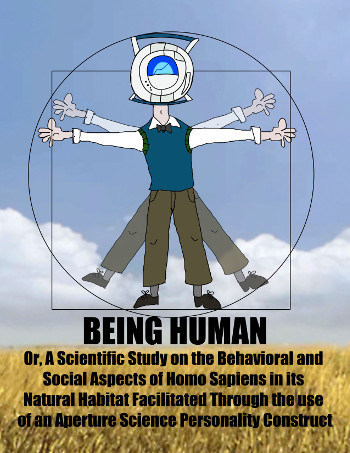 Being Human Or, A Scientific Study on the Behavioral and Social Aspects of Homo Sapiens in its Natural Habitat Facilitated through the use of an Aperture Science Personality Construct

is a Portal 2 fanfic written by Doombly, aka Sue Mary and MarrissaTheWriter. It is not to be confused with the television show of the same name.

One day, GLaDOS discovers that she doesn't understand humans outside of what they do in test chambers, and not understanding all the potential variables is the first step on the road to bad science. So she decides to place an AI into one of the frozen human bodies she has and send it out to study humans in their "natural habitat". Unfortunately the only AI that's suitable for transfer is... Wheatley. Armed with a computer chip that allows her to talk to and see everything Wheatley does, GLaDOS sends him out into the surface.

What follows are the humorous recounting of Wheatley's attempts to socialize with humans and adjust to his new body, coupled with GLaDOS snarking on human culture, tons of bizarre cameos ranging from the cast of One Flew Over the Cuckoo's Nest to Christian Weston Chandler himself, plenty of shout outs to internet memes, and a dash of shipping.

After several failed attempts at a sequel, the story had an Ask-Wheatley tumblr created for it. Unfortunately, as Doombly had lost the password for it, it fizzled out shortly after being created (and eventually was automatically deleted), and the author has largely moved on to writing stories for fandoms such as BioShock Infinite, Five Nights at Freddy's and Star vs. the Forces of Evil.

Being Human provides examples of: