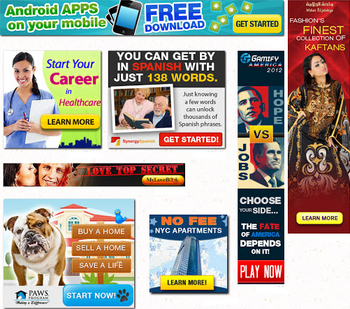 Well, this is annoying.note  If you would like to block all ads, you may subscribe to our premium service for only $3.99 a month.
"Hey! There's a fine art to annoyance! Annoyologists get paid big bucks to figure out how many ads you can put on a web page before people will click to another site."
— Ecosystems Unlimited psychologist Varroa Jacobsoni, Freefall, August 27th, 2008.

Well firstly, you see the ad on top, and the ad just to the left? If you don't, turn off your Adblocker (you cheap bastard). Those are Internet Ads. They are basically like ads in print media. They allow money to come to a site, so that sites can operate without people charging us to use the site (or at least charging us less than they would have).

In its most basic form, an ad on the Internet is simply put in a designated spot. Two main differences between this and print ads are that money from the ad is partly based on how many clicks an ad gets (so do that once in a while, to help this site), and that an ad will likely change if you refresh the page, especially when more companies are advertising on the site. Unfortunately, the pay-per-click model invites something called click fraud. Project Wonderful

, which also serves ads on this wiki, strives to eliminate click fraud through its "Infinite Auction" system. Another problem for web-based advertising are pop-up and ad blockers, which interestingly prevents you from viewing the above site properly.

Another form of ads is through pop-up windows. Those are hated more than anything else. They not only are intrusive, waste memory and occupy task bar space (depending on your operating system UI and/or internet browser), but some have the gall to disguise themselves as alerts from your system.

Some ads take it to the extreme of being outright evil and use a security hole in your browser to install malware on your system. If you're viewing it on anything other than Windows, you can foil the attempt of malice because they're asking you to download a Windows executable (though, honestly, even if you're using Windows, programs generally don't install themselves, and even if they did, you usually know about it beforehand.) Even more obviously is if they are showing the GUI for Windows XP while you are running on Windows 7, Windows 10, MacOS, Linux, and, more amusingly, Smartphones.

Another form of advertising is the in-page pop-up, or lightbox. These are far more annoying, as they take over the entire webpage until you can close them, a more difficult task than strictly necessary since they don't use your operating system's standard GUI.

By far the most annoying of all these ads are be the flashing pop-up ads. These appear in their own web page, disappear into the background for a second, and then reappear. The hope is that they are hidden in the brief moment of time you are heading to mouse the "X" button in the corner of the browser window so instead of closing the ad, you don't react fast enough to the flash and close the browser windows you are working in, leaving the ad open instead. Safe to say, people generally find these annoying.

Internet advertisements are also one of the cutting-edge areas of research for annoying users with multimedia software, pioneering techniques such as embedded frames, animated GIF banners, blink tags, auto-playing audio and video ads, which are almost always powered by Flash, or some poorly made java-based video player. Needless to say, this tends to eat up enormous amounts of bandwidth and cause compatibility problems (up to and including instant crashes) on pages that would otherwise present only meager burdens on the reader's system. Most people hate these type of ads.

One of the few benefits that the annoying ads described above gave everyone online, is the general depreciation of older technologies used to display the adverts, with web browsers like Google Chrome dropping flash by default as of the end of 2020, forcing advertisers to use HTML5 or javascript to deliver their ads instead. Flash has always had Disproportionate Memory usage for a web-page, so a page merely showing ads plays a big role in the reason behind this deprecation of Flash in general (something even Adobe itself admitted was an issue). After all, the smaller footprint you leave on a webpage, the more chance the page will load your advertisement on as many computers and devices as possible. Because of this, adverts won't be going away, but their existence on a page should keep your web browser chugging along fine in the near future.

has some interesting pages about ads, and how we resent them or ignore them. If its author were an annoyologist, he would deserve big bucks.

While Internet Ads are not a trope by themselves, we have Annoying Pop-Up Ad for a certain variation of them irritating characters in-universe or the player.