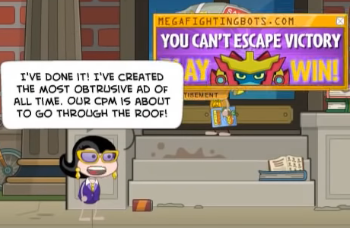 Pop-up ads are probably the most infamous type of Internet Ads. They show up out of nowhere, waste RAM, have some sort of inane product or deal you don't care about, may link to malware or other harmful crap, and take a couple precious seconds to close with a small "x" located in the window's corner (and sometimes, you may not even find it). Naturally, they can be used as a way to cause annoyance in media.

Please keep examples limited to In-Universe use or game mechanics (which can oftentimes overlap with Interface Screw) deliberately intended to have this effect. We understand how much of a nuisance they are (which is why you can report particularly bad ones on this site in this thread

or purchase an Ad-Free pass for 20$ per year), but this is not the place to complain.