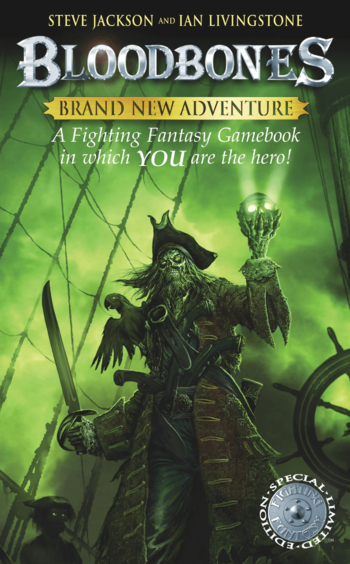 Bloodbones is the 61st entry in the Fighting Fantasy series of gamebooks, written by Jonathan Green, and has an infamous history amongst the fandom as a Missing Episode; it was originally intended to be published as part of a relaunch of the Puffin range in 1995, but would not see publication until 2006 as part of the Wizard range.

Long ago, the dreaded pirate captain Cinnabar sailed the oceans with a crew of dangerous buccaneers and cutthroats, spreading death and pain wherever they went. The evil, voodoo-worshipping captain was responsible for a raid on Clam Beach, during which your parents were killed. Furious, you grew up intending to avenge them and kill the pirate captain. Years later, you enter the Port of Crabs, looking for information about your nemesis, only to learn that Cinnabar was apparently killed in battle 6 months earlier, his body lost at sea and his ship abandoned. However, an old, half-drunk mariner approaches you and tell you of a rumor circulating in the port: Captain Cinnabar isn't really dead, but has returned as a zombie thanks to the abominable powers of the Voodoo God he serves, and now his companions have been spotted in the streets of Port of Crabs, plotting something. As you leave the inn, the rumors are proved based when some pirate thugs ambush you. Starting from there, you will have to undertake a long and dangerous mission to find your nemesis and stop him before he returns from the dead to plague once again the seas of Titan.

Bloodbones follows Green's standard adventure format, dependent on Plot Coupons and codewords to proceed in your quest, though this time in a more interesting, piratey setting, starting from the shady streets of Port of Crabs to pirate galleons to jungle island and voodoo temples.