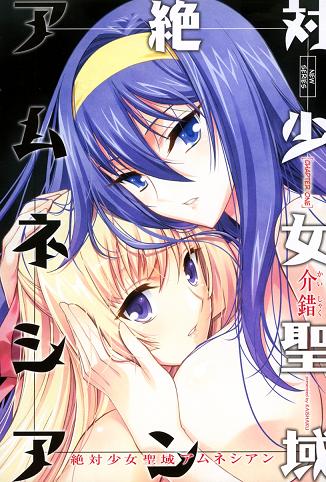 The sixth reincarnation of Chikane and Himeko, of Destiny of the Shrine Maiden and Shattered Angels fame, also drawn by Kaishaku. The manga ran in Young Ace from 2009 to 2011.

This time, Himeko is cast as a devout Christian priestess-in-training whose parents and "beloved" older sister Chika died in an accident some years ago. One day, after observing a total solar eclipse (taking place 46 years after the previous one), she finds a beautiful young woman pinned to the wall above the altar of her church with a katana. Astonishingly, the woman is still alive and utters Himeko's name but even more so, she is a spitting image of her late big sister Chika. With a little medical attention, the woman rapidly recovers enough to introduce herself as Chikane and explain that she doesn't remember anything else except Himeko's name and her own love for her. Said love manifests in repeated seduction attempts but also in the utter devotion to protect Himeko from all dangers.

Said devotion comes in handy when the villainous members of "Nine Days" show up, targeting Himeko, whom they believe to be the carrier of the "Absolute Sanctuary" and the "Dragon's Cry". Now Chikane is pretty much the only protector Himeko has got—not to mention that her resemblance to Chika repeatedly leaves her in a dazed state.