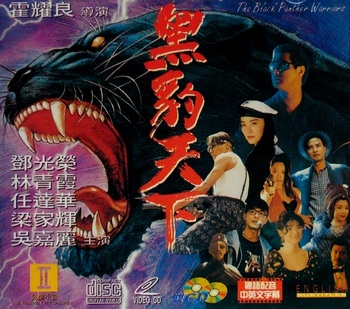 The Black Panther Warriors is a 1993 Hong Kong action movie directed by Clarence Fok (Naked Killer), envisioned as a modern-day Wuxia with an Ensemble Cast including Alan Tang "The Student Prince" (Flaming Brothers), 90s wuxia queen Brigitte Lin (The Bride With White Hair), Simon Yam (Full Contact) and Tony Leung (no, not the one from Hard Boiled or Infernal Affairs, the other one. The one nicknamed "Big Tony" by Hong Kong cinema fans).

Black Cougar (Tang) is a swordsman and expert martial artist, once a student of the Cougar order, but have since left his order after failing to save his mentor from being killed. Now a master thief, leading a band of experts and professional badasses, Cougar is recruited to steal a valuable silver box whose contents unveils a shocking revelation of his past. With a powerful enemy long assumed to be dead returning, Cougar and his team, including magician and Death Dealer Blackjack (Simon Yam), military ex-commando and Gun Nut Mang-po Fai (Tony Leung), Cougar's protege, lover and Distaff Counterpart Ching-ching (Brigitte Lin) and dart-expert Madame Rose (Carrie Ng) are in for the battle of their lives.

Loaded with enough action scenes which are as improbable as they are bizarre, overblown special effects, unexplained martial arts techniques, comic book acrobatics, hyper-speed brawling, more than 200 onscreen deaths and logic-defying moments and stunts, the entire movie feel like an anime film coming to life, though its not without the usual "mou lei tao" comedy usually seen in Hong Kong films popular at its time.