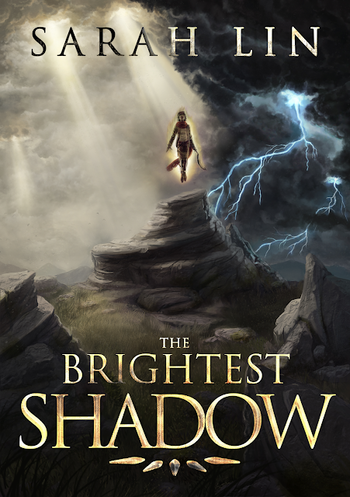 "The arrival of the Hero was worse than anyone could have imagined."
Advertisement:

The Brightest Shadow is an Epic Fantasy series of novels, written by Sarah Lin, and also the title of the first book in the series. Its setting is a blend of Wuxia and high fantasy elements, notable for heavily subverting many of them. The world of Myros is split between two species: humans and mansthein.

The first book introduces a Legend about a Hero killing the Dark Lord and all his Deathspawn minions. Except when the Call to Adventure happens, it's treated as a horror story. The "monsters" think of themselves as The Federation and the Hero's plan is essentially genocide.

So the real story is about characters who aren't the Hero trying to make peace despite the forces of destiny. The Hero is somewhere between an unstoppable force of nature and a roaming murderhobo. But it isn't so simple, because the mansthein have some tendencies of The Empire and many are far from innocent. So the conflict is about Grey-and-Gray Morality being forcibly rammed into a Black-and-White Morality framework.

The Brightest Shadow contains examples of: