Film / Across the Wide Missouri 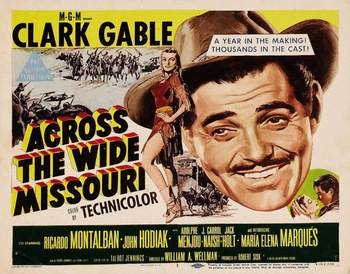 Across the Wide Missouri is a 1951 film directed by William A. Wellman.

The setting is 1829-30 in the Rocky Mountains, when the area was largely empty of white people. Some of the few white people in the region are fur trappers, like Flint Mitchell (Clark Gable). Flint is the unofficial leader of a "brigade" of fur trappers, who band together for safety. At a rendezvous with other fur trappers, Flint meets Kamilah, the lovely adopted daughter of a Nez Perce chief. Flint marries her, largely to encourage friendly relationship with the Nez Perce and Blackfeet, but love blossoms.

Flint runs in to a bloodthirsty Blackfoot brave, Ironshirt (Ricardo Montalbán) who kills one of his friends. However, Kamilah's grandfather Bear Ghost is the Blackfoot chief, and he and Flint make friends. Unfortunately one of Flint's fellow trappers kills Bear Ghost, putting Ironshirt in charge of the Blackfeet and setting up a violent confrontation.