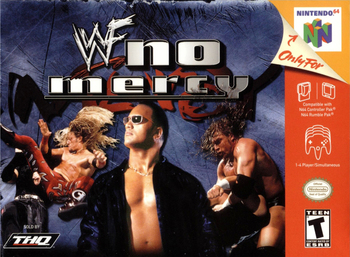 WWF No Mercy is a Professional Wrestling video game for the Nintendo 64 that was released on November 17, 2000 in North America, with a European release the following month; it was the last licensed wrestling game made by established developer AKI Corporation (now Syn Sophia), who had previously made the Virtual Pro Wrestling and WCW vs. nWo series along with WrestleMania 2000 — and would go on to make the Ultimate Muscle/Kinnikuman games, the Def Jam Series, and two SimCity games for the Nintendo DS. It was also (along with WCW Backstage Assault) the last wrestling game for the 5th Generation of console gaming, which happened to coincide with the end of wrestling's Monday Night Wars era (and the WWF's Attitude Era).

No Mercy was set at the pinnacle of the Attitude Era, and years later is something of a time capsule to that period in wrestling history. It was the first game in the series to include a fleshed-out career mode, replacing the "win a gauntlet of matches against the computer" Excuse Plot found in previous entries. Players could select any title division and follow storylines that actually happened in real life, with the storylines branching and diverging based on wins and losses, and player decisions. It also featured a gigantic roster bolstered by many hidden characters, though completely excluding Big Show note At the time, Show was sent to developmental territory OVW while the game was in development in order to lose weight and improve his cardiovascular fitness; his position in the storylines was taken by Steven Richards. It also had the largest selection to date of possible match types; this combined with a relatively shallow learning curve contributed to the game's cherished multiplayer feature. On the downside, No Mercy suffered from a major bug - the first few production runs of the game shipped with a defect built into the game's code that wiped all the save data after a set amount of time; as a result, the bug's in nearly every known ROM of the game note Look for a V1.1, or Rev A, preferably of the NTSC variety as this one never had blood stripped for censorship unlike at least one European build.

The easily-hackable nature of N64 ROMs has given it a still-active modding community, with more than a few e-feds still using the game to sim matches featuring either modern day wrestlers or CAWs.