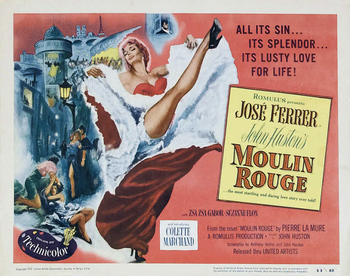 "Love is a state of confusion in which the victim can not distinguish between spiritual aspiration, carnal desire, and pride of ownership."
— Henri de Toulouse-Lautrec
Advertisement:

Moulin Rouge is an Best Picture-nominated biopic made in 1952, directed by John Huston and starring José Ferrer and Zsa Zsa Gabor. It's much less acid sequence and more Tragic Hero, showing the life and work of Henri de Toulouse-Lautrec in fin de siècle Paris, and the love he tries to find.

Contrary to belief, this movie has no relation to Moulin Rouge!, the 2001 musical.