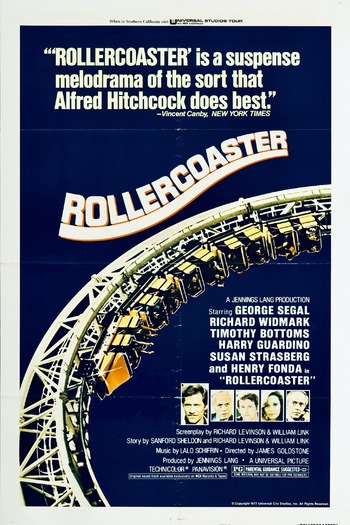 No, this is not an Alfred Hitchcock movie, despite what the poster would have you believe.
Advertisement:

An unnamed saboteur, simply called "Young Man" in the credits (Bottoms), sneaks into Ocean View Amusement Park and places a small radio-controlled bomb on the tracks of the Rocket, the park's wooden roller coaster. The bomb detonates and a coaster train derails, killing and injuring the riders. Safety inspector Harry Calder (Segal), who initially cleared the ride, is called to the park to investigate. It is soon discovered that the attack was just one of many taking place at amusement parks throughout the country, and it's up to Calder and FBI Agent Hoyt (Widmark) to stop the bomber.

Notable as one of the few films to be screened with the "Sensurround" process at select theaters, which caused those watching it to vibrate during certain "thrill scenes" involving the rides.