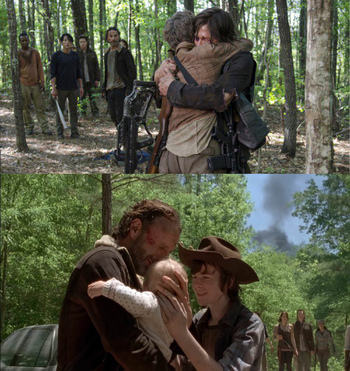 "Every road you take will always lead you home."

Carol wages war on Terminus to save the rest of the group.

A group of people from Terminus are seen in flashback discussing how they only wanted to do right, while a woman screams offscreen. Alex, who got killed in the Season 4 finale, laments to Gareth and asks what they have become...

In the present, the boxcar prisoners are readying improvised weapons. Rick and Abraham are prepping the others for how to attack when the doors are opened, but their plans are foiled when a smoke grenade is thrown in through the top of the car. Everyone is forced out, and Rick is knocked unconscious by one of the Terminus members.

He wakes up alongside Bob, Daryl and Glenn and four other prisoners, who are all kneeling in front of a trough. A pair of men begin slaughtering the prisoners by knocking them out with a baseball bat and slicing their throats to bleed out in the trough. Just before he knocks out Glenn, Gareth enters and asks for a report on their counts, causing them to pause for a moment. Bob tells Gareth to stop what he's doing, and says that Eugene knows a cure and they need to go to Washington. Gareth refuses to listen, and instead asks Rick that the Terminus search party couldn't find the bag of guns he hid in the forest. Rick tells him that it's filled with guns and a machete and says that he's going to kill him. Before anything else can happen, gunfire is heard and a large explosion knocks them down.

Carol and Tyreese are still following the rail tracks in the nearby forest. She asks if he's ready to get back to clearing out walkers, but he tells her that he's still not comfortable with killing. Both of them are distracted by a horde, and hide while they pass by. The horde is distracted by gunfire and starts walking towards it. Carol realizes that it may be coming from Terminus, and that they should go investigate.

Walking along the tracks, Carol and Tyreese discover a Terminus member, Martin, holding a conversation with another person over walkie-talkie about a "chick with a sword" and a "kid with a hat". The pair take him hostage and tie him up inside a nearby cabin. When she doesn't believe his information after questioning, Carol orders Tyreese to watch him and Judith while she goes on ahead. The Terminus man, Martin, tells her she won't be able to get close, but Carol ignores him and leaves.

Carol coats herself in walker guts and makes her way to Terminus. She sees Rick and the others being taken inside, and sets up a perch with her equipment. Using a sniper rifle and a firework, Carol blows a propane tanker up, which causes a massive explosion and results in several walkers being set on fire. She moves into the base.

Inside, the two butchers are questioning whether they should go outside and help. They are surprised by Rick, who cuts through his bonds with a wooden shiv in his shoe and brutally executes both of them. He frees the others and tells them to leave the bodies to turn. Their search for weapons leads them to a room full of butchered human bodies. Disgusted, Rick orders his men to not hesitate to kill the Terminus people. They head outside and see carnage - walkers are everywhere, and numerous Terminus residents are being attacked.

The four men begin carving their way through walkers to get to a nearby boxcar to free a prisoner inside. When they do, he runs out screaming at them that they're Not So Different before he's munched on by a walker. The four continue on, and Rick kills a Terminus member and takes his AK-47 before killing several others and passing out rifles to the rest of the group.

Elsewhere, Carol is moving through the base and killing Terminus members while blending on with the herd. She makes her way inside a building and finds the confiscated items from the group, and takes her old watch and Daryl's crossbow, then comes face-to-face with Mary at gunpoint, who orders her to set down her gun. Carol spins and fires before tackling Mary, and eventually grabs her rifle to point at the latter. Mary tells her about Terminus' past, and how they were decent people who were forced to adopt a harsh mentality when their members were raped by another group and they rebelled to take control back.

Mary asks Carol to kill her, but the latter instead kneecaps her and leaves her to a horde of walkers.

Tyreese is keeping watch on Judith in the cabin when he is distracted by walkers outside. Martin uses the opportunity to take hostage and force Tyreese out under threat of killing her, but is ambushed moments later when Tyreese busts his way back in and brutally beats the man...

Rick, Daryl, Bob and Glenn free the rest of the group and they escape over a fence, though not before shooting Gareth as he tries to attack them.

In the forest, Rick retrieves the bag of guns. He is surprised by Carol, and he and Daryl tearfully greet her as the rest of the group look on in happiness. They walk back to the cabin and find Tyreese and Judith, and everyone has a tearful reunion.

Rick tells the others that they need to head away from Terminus, while Abraham tells Rosita that he'll talk to him about heading to Washington. Together, the much bigger group begins making their way through the forest. Rick pauses at a "SANCTUARY" sign and spray-paints the word "NO" in front of it before leaving...

In another flashback, Mary gets thrown into a box car while two bandits - one of them the crazy tattoo guy - selects another woman to be raped. Gareth tries to comfort Mary, promises they will take back Terminus, and delineates their new ideology: "You're either the butcher, or the cattle."

Some time later, a hooded and masked man is walking down the tracks and stoops to read the sign. He turns around and takes off his hood to reveal... Morgan, who begins to follow the markings on a tree someone has left in the forest...